Sporthall Trebelno has been nominated for European Union Prize for Contemporary Architecture – Mies van der Rohe Award 2022.
About the nomination
About the project

Sporthall Trebelno received award in national competition for best wooden building in Slovenia, awarded by Spirit agency and Ministry of Economic Development and Technology. Due to Covid restrictions the award ceremony has been recorded in studio.
More information

We are happy to have received the second award among thirty-six projects in public competition for kindergarten in Slovenska Bistrica.
More information

Music school Sostanj has been one of the two projects nominated for Plecnik national award.
More information

Mojca Gregorski is a guest speaker at conference "12. dani pasivne kuće u Hrvatskoj" at Faculty for architecture in Zagreb.
More information

Mojca Gregorski has the awarded project presentation at Festival Wood Icon 2019, at City of Design in Ljubljana
More information

Mojca Gregorski was chosen among 9 European architects to present their projects as part of GAP exhibition at Glyn Davis building at the University of Melbourne. Organised by University of Melbourne, Faculty of Architecture, Building and Planning. The exhibition and accompanying catalogue serve to promote contemporary architecture in cities that are often underrepresented from major design publications.
About the exhibition

Kindergarten Poljčane received third award at ARHIED (Architecture + Education) conference for the best realization in the category "Objects for education".
About the award

Kidričevo municipality is among the recipients of Stele award for renovation of Sternthal castle. Mojca Gregorski and Katja Paternoster were the authors of the architecture renovation.
About the award

We are very proud to announce that we have been awarded with Plečnik's medal for project Kindergarten Poljčane. Plečnik's award and medals are the highest Slovenian recognitions in the field of architecture.
About the award
About the project

Kindergarten Polzela has been nominated for European Union Prize for Contemporary Architecture – Mies van der Rohe Award 2015.
About the award
About the project

Mojca Gregorski has been selected among Europe's most important and emerging young architects and designers - "Europe 40 Under 40" for 2014.
About the award
Press release

After only five months of intensive construction works, the kindergarten Polzela is completed. Although children are already using it, the official opening will be on 17th of October.
About the project 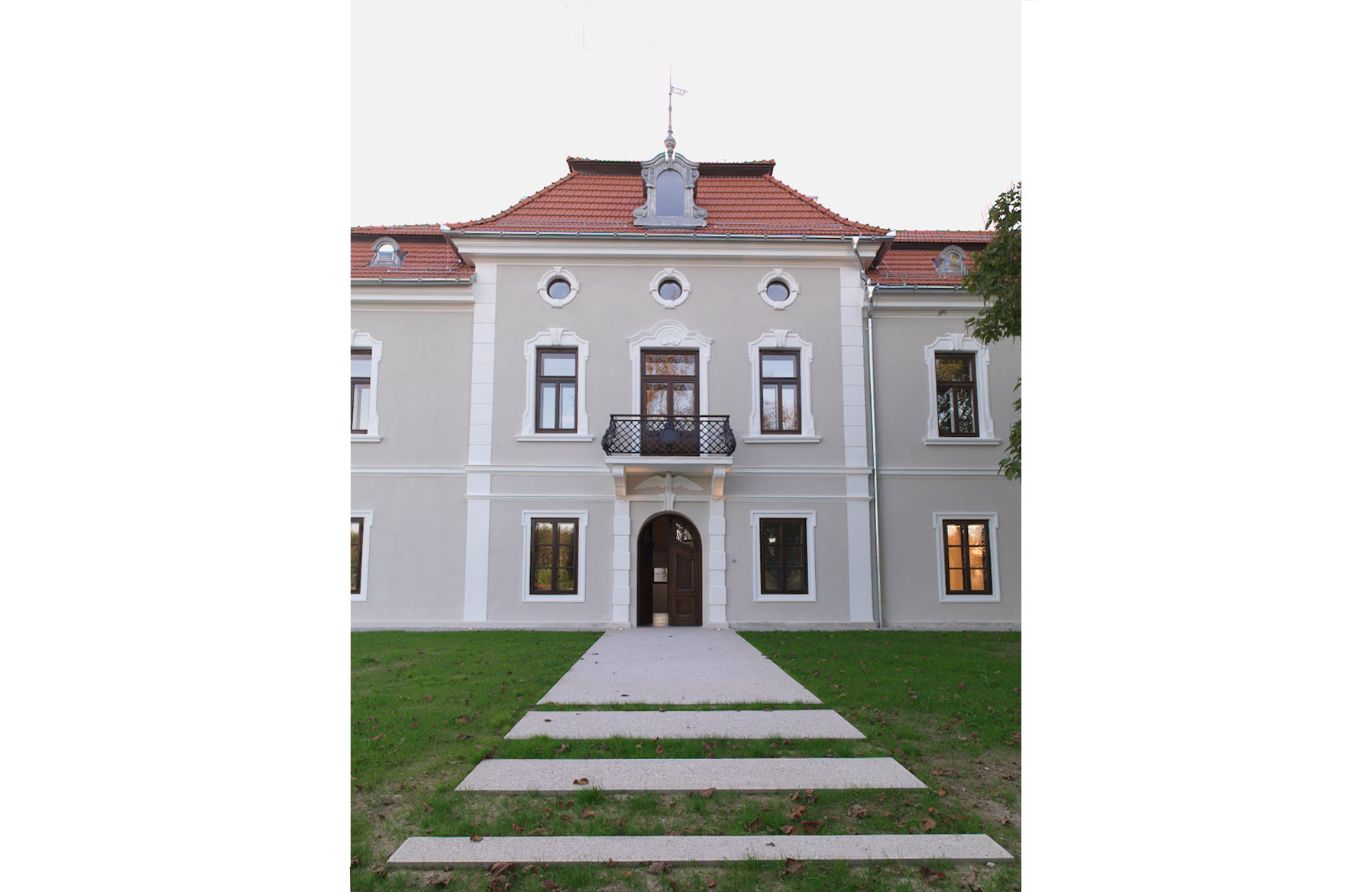 The renovation of castle Sternthal in Kidricevo finished in October 2014. The building will accommodate the city municipality, wedding hall, gallery and other public programs.

We are proud to announce that two of our projects have been completed. You are kindly invited to the opening of Kindergarten Poljčane and Kindergarten Šoštanj on 26.9.2014.
About the project

article in A10 magazine

European architecture magazine A10 published an article about new young slovenian generation. We are proud to be part of this 'team'.

Towards the end of the year we are very busy having three interesting projects under construction: Kindergarten Poljcane and Castle Sternthal are halfway through and Kindergarten Sostanj is starting with demolition of old school.

After nearly a year of collaboration with Slovene Etnographic Museum, we are proud that the exhibition 'Doors. Spatial and symbolic passageways of life' opened to the public. The architecture of the exhibition was designed by Mojca Gregorski and Miha Kajzelj.
About the exhibition

interior of the year award

Interactive showroom has been chosen among three finalists of Interior of the Year award.
About the award

Slovenian magazine 'Hiše' published interviews with eight outstanding female architects in Slovenia. Among them a seven-page interview with Mojca Gregorski.

We have been awarded second prize in public two-level competition for urbanistic and architectural project of municipal and cultural center Vodice.
About the award

Flexible kindergarten Chameleon also won WAN AWARD 2013 Education as Best In Class! It has been chosen from realized and future kindergarten projects.
About the project
About the award

We are very proud that our project Flexible kindergarten Chameleon became winner of WAN AWARD 2013 Education-future projects!
About the project
About the award
Press kit

Sport hall Kidricevo has been chosen for exhibition "Architecture =", which showcases the greatest achievements of Slovenian architectural output of the last five years.
About the exhibition

presentation of Chameleon in Kazakhstan

We presented our Chameleon kindergarten project to potential clients and investors in Kazakhstan.

We participated in international competition for slovene national library NUK II, together with over 100 other entries. Our project qualified to the selection of final 30.
More information

Sport hall kidricevo has been nominated for Plecnik award, national most important architectural award. There were 6 nominees, presented also in catalogue.
Catalogue

Klik magazine interviewed us about our smart entrepreneurial-idea project Chameleon.

Kindergarten Kidricevo has been presented in book 'Kindergarten architecture' published by LINKS.

We went public with the project of Flexible kindergarten Chameleon, which we have been developing since March 2011 in collaboration with Slogradnje d.o.o., several individual consultants and banks.

As part of the Open House Slovenia initiative, two of our buildings will be open for public on 9. Oct.: Kindergarten Kidricevo (12:00PM), Sporthall Kidricevo (1:00 PM).
More information

An important basketball match of Primus League (preparations for Euro 2013) between Slovenia and Macedonia took place in sport hall Kidricevo. The sport hall was built primarily for futsal; however, its flexible design enables hosting of international basketball matches. 2500 spectators enjoyed the game.

MODULAR architects with collaborators won second award (among 37 participants) in public competition for sport hall Portoval in Novo mesto, which will be built for European basketball championship in 2013. Third award was not presented.
More information

Mojca Gregorski received honourable recognition of her works, awarded by University of Ljubljana and presented by rector prof. dr. Radovan Stanislav Pejovnik. The recognition is presented to individuals who achieved international outstanding visibility of their realised works and is equivalent to doctorates in the field of theoretical research.
Photo gallery 10.5.2011

In February Kidricevo sport hall received operating permit and was put into use. Minister of Education and sport Igor Luksic held a speech at the official opening ceremony on 25th of March.
Video of the ceremony

Mojca Gregorski participated in a round table discussion at 1st green building conference “Energy and architecture in harmony” in Maribor organized by Menerga. Other participants of the event were Alenka Kragelj Erzen, Nande Korpnik and Marko Studen.
Conference programme
Conference report
Video recordng of the conference

Among over fifty participants we received honourable mention in competition for kindergarten in Ribnica.
ZAPS
Presentation

You are invited to attend live judging of our project on World Architecture Festival in Barcelona, November 4th at 14:00.
Announcement
WAF

Honourable mention in competition for swimming complex Kolezija in Ljubljana.
About the project

Kindergarten Kidričevo published on the cover of Swisspearl magazine. Inside - article about the building and interview with authors.
Cover

Kindergarten Kidričevo has been nominated for European Union Prize for contemporary architecture Mies van der Rohe, one of the most prestigious awards in international architecture.
Nomination description
About the award
2009 Prize Full Press Kit

Project Kindergarten Kidričevo has been selected to take part in Piranesi exhibition and qualification for the award.
About the project
About the award
Programme and events

"Golden pencil" award for excellence in realization in cathegory 'public building'.
About the project

Construction progress
About the project

1st award in invited competition for residential complex in Ozeljan near Nova Gorica.
About the project

construction of kindergarten in Kidričevo started.
About the project

construciton of residential complex in Litija is in progress.
About the project

"Golden pencil" award for excellence in realization within past three years in cathegory 'Interior design'.
About the project