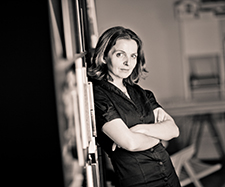 Mojca Gregorski (born 1975) graduated in 2000 from the Faculty of architecture at the University of Ljubljana in Slovenia. She attended PhD study in Ljubljana as well as at the Universidad Politecnica de Valencia and Jagellonian University in Krakow, Poland. She had been getting her work experience in architectural offices abroad and in Slovenia before in 2009 she established her own office - MODULAR arhitekti (now KONTRA arhitekti).

She received several prestigious awards in Slovenia (3 Golden pencils from Chamber of architecture, Plecnik's medal, two nominations for Plecnik award, nomination for Piranesi award, two nominations for Mies van der Rohe award, many awards in public competitions,...) as well as abroad. In 2009 she was a finalist of World architecture festival (Education) and in 2013 the winner of the World architecture news for Education-Future projects as well as "Best in class 2013". In 2011 she received honourable recognition of her works awarded by University of Ljubljana. This recognition is presented to individuals who have achieved international outstanding visibility of their realised works and is equivalent to doctorates in the field of theoretical research.
In 2014 Chicago Athenaeum has chosen her among "40 under 40" architects in Europe.

Currently she works as leading architect in KONTRA arhitekti and as professor at the Faculty of architecture at the University of Ljubljana. She has been co-mentor of several graduate works, workshops and other projects at Design studio.
Her practical work consists of realisations in different architecture scales - ranging from small designs and houses to more complex urbanistic designs. Most of her realised work is in the field of public buildings (kindergartens, sport halls and complexes, home for elderly, castle renovation,...).
She is interested in realisations of contemporary architecture in response to contextual parameters as much as social influences. Results are based on constant investigations about new functional and spatial solutions. Buildings are interweaving to the surrounding environment, not trying to dominate it. It is important to be honest in the detail and in the use of materials.